Forex Analysis & Reviews: How to trade GBP/USD on January 26. Simple trading tips and analysis for beginners 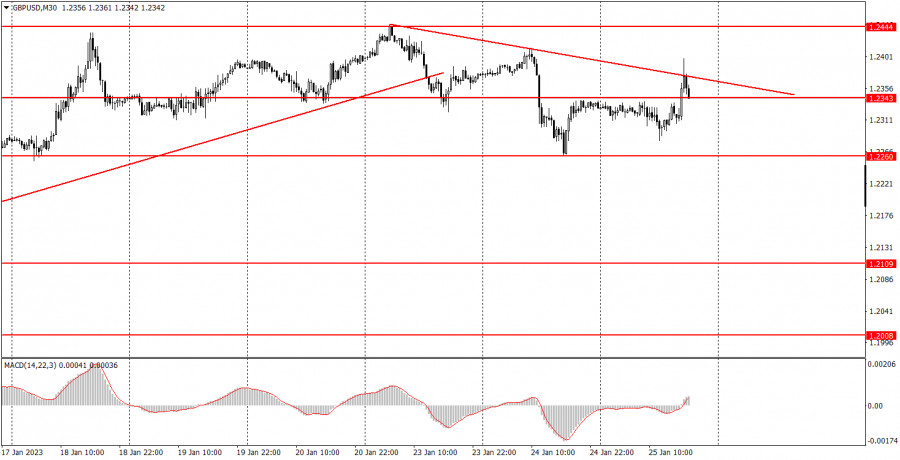 GBP/USD edged up on Wednesday, but volatility was generally not very high. Throughout the day, traders could only pay attention to the UK producer price index. However, this report did not provoke any reaction since it isn't important. During the European session, the pair was moving sideways instead of moving in a trend. Nevertheless, the movements of the last few days made it possible for us to form a new descending trend line, which currently supports the bears. A rebound from it suggests that a new round of decline will start on Thursday. Do recall that we have been waiting for the pair to fall for a long time now, since there aren't any clear reasons for the pound to continue rising after it went up by more than 2000 points already, which is about 50% of the entire global downtrend, which has been observed for the last two years. Nevertheless, a consolidation above the trend line could again trigger a groundless rise of the British currency.

Speaking of trading signals, the situation was not the best, but we should still try to figure out how we should have traded. The first two signals - the bounces from 1.2337 - were false, because the pair could not reach the nearest target level. To be fair, it should be mentioned that it was located far enough. In the first case, the price moved 40 pips in the right direction, while in the second case, it reached 16 pips. In the first case, a Stop Loss broke even, in the second case, there was a small loss when the price was above the area of 1.2337-1.2343. The buy signal near this area should not have been triggered, since the last two signals were false and the corresponding positions were opened. But the rebound from 1.2387 could be covered by a short position, which allowed newcomers to earn about 27 pips, as the price quickly went back to 1.2337-1.2343. As a result, the loss on the second deal was evened out.

Basic rules of the trading system:

1) The strength of the signal is determined by the time it took the signal to form (a rebound or a breakout of the level). The quicker it is formed, the stronger the signal is.

2) If two or more positions were opened near a certain level based on a false signal (which did not trigger a Take Profit or test the nearest target level), then all subsequent signals at this level should be ignored.

3) When trading flat, a pair can form multiple false signals or not form them at all. In any case, it is better to stop trading at the first sign of a flat movement.

4) Trades should be opened in the period between the start of the European session and the middle of the US trading hours when all positions must be closed manually.

5) You can trade using signals from the MACD indicator on the 30-minute time frame only amid strong volatility and a clear trend that should be confirmed by a trendline or a trend channel.

6) If two levels are located too close to each other (from 5 to 15 pips), they should be considered support and resistance levels.

Support and Resistance levels are the levels that serve as targets when buying or selling the pair. You can place Take Profit near these levels.

Red lines are channels or trend lines that display the current trend and show in which direction it is better to trade now.

The MACD indicator (14, 22, and 3) consists of a histogram and a signal line. When they cross, this is a signal to enter the market. It is recommended to use this indicator in combination with trend patterns (channels and trendlines).

Important announcements and economic reports that can be found on the economic calendar can seriously influence the trajectory of a currency pair. Therefore, at the time of their release, we recommend trading as carefully as possible or exiting the market in order to avoid sharp price fluctuations.

Beginners on Forex should remember that not every single trade has to be profitable. The development of a clear strategy and money management is the key to success in trading over a long period of time.

*The market analysis posted here is meant to increase your awareness, but not to give instructions to make a trade.

InstaForex analytical reviews will make you fully aware of market trends! Being an InstaForex client, you are provided with a large number of free services for efficient trading.

GBP/USD managed to correct into the medium-term bull market zone amid a weak U.S. dollar, rising above 1.2130, 1.2240, through which important support levels pass: 200 EMA on the daily

Gold: new range ahead of US stats

Gold rallied in the short term and now is almost to reach the first upside obstacle. It's located at 1,930 at the time of writing but it's trapped within

When to open long positions on GBP/USD: In the first half of the day, no entry signals were generated. Let's take a look at the M5 chart

In my morning article, I turned your attention to 1.0889 and recommended making decisions with this level in focus. Now, let's look at the 5-minute chart and figure out what

Higher-than-expected GDP growth in the US drove demand for dollar up, resulting in a correction in other assets, such as gold. Since the metal is yet to work

EUR/USD and GBP/USD: trading plan for beginners on January 27, 2023

On Thursday, the United States saw the release of the first Q4 GDP estimate. Economic growth slowed to 1.0% from 1.9%, well below the market forecast of 1.6%. These

Yesterday, there was a great signal to enter the market. Let us take a look at the 5-minute chart to clear up the market situation. It was quiet during

Outlook and trading signals for GBP/USD on January 27. COT report. Analysis of market situation. The pound prefers a wide flat.

GBP/USD moved mostly sideways than up or down on Thursday. If you look at the pair's movements over the past two weeks, it seems more like a flat

Outlook and trading signals for EUR/USD on January 27. COT report. Analysis of market situation. The U.S. GDP report did not help the dollar.

EUR/USD did not show any interesting movements on Thursday. The price was still moving slightly above the critical line, and the entire movement still looks more like a flat than

The US dollar index dropped through the 101.11 lows on Thursday, re-testing its earlier swing low of January 18, 2023, before finding bids again. The index is seen

793
Can't speak right now?
Ask your question in the chat.